From Kmart to Quanzhou: Changing Lives Through Teaching English

QUANZHOU, China – In life, it’s amazing how you sometimes do one small thing, which can change your path in a very dramatic way. It’s likeThe ButterflyEffect, where a butterfly flapping its wings in one place, can contribute to a tornado on the other side of the world.

Over the years, I’ve had two of these seemingly small – but ultimately significant – events. The first was meeting my friend, Adam. The second came much later, when I joined HelloTalk.

In fact, the first time I met Adam – in 2005 – wasn’t face-to-face. I was 16, and growing up in Kansas City, in the American Midwest. He was 15, and living a couple States away, in Wisconsin. We met online, playing the same video game: RuneScape. 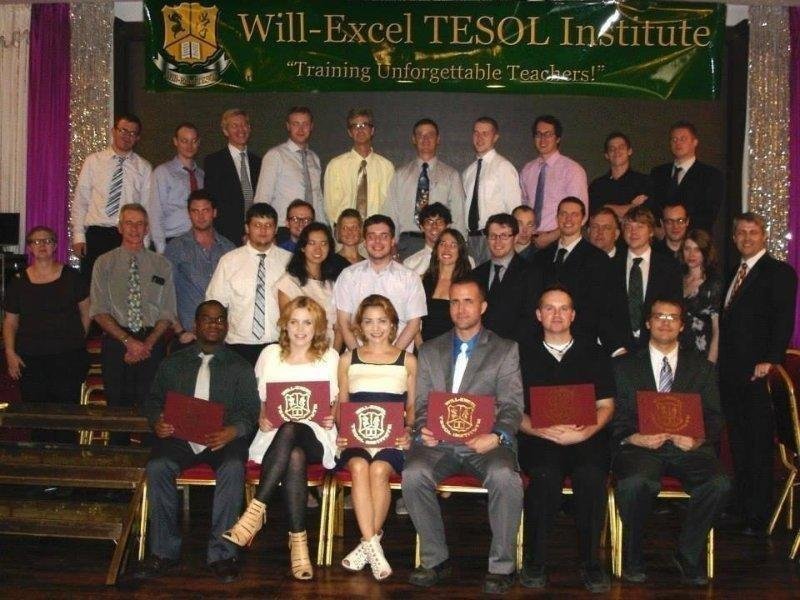 Jeffrey’s and Adam’s graduation (Jeffrey first on the left in the top row, Adam — in the middle row, fourth form the left)

We became good friends over the years, often confiding in each other: we both wanted to do something big with our lives, but weren’t sure what. Adam seemed really interested in Chinese culture, but I’d never really thought about China before.

I remember just one time, when I was a kid, and a friend pulled a notebook out of his backpack: it was covered with a whole bunch of Japanese and Chinese characters. I thought it was all the same. I asked him, “Is that Japanese?” He said, “No, this is Chinese – and that’s Japanese.” I remember thinking, “That’s pretty cool.”

By 2011, I was 21 and working in retail, at a Kmart in Kansas City. Adam became more and more serious about China. He told me, “I’m going next year. Want to come with me?”

I don’t think there was any way he would’ve gone alone. I also knew I wanted to see the world. “Should I do this, maybe? What would we do there, if we go?”

We searched online and learned we could teach English. The first thing we’d have to do in China would be to take a TESOL course. Our idea was to take the course, teach English for a year, then go back.

My family was quite supportive. When I first mentioned our plan to my Dad, he said, “Wow, that’s really going out and seeing the world!”

Still, I was really nervous, for sure, before we arrived in August 2012. I remember being on the plane, flying over, thinking to myself, “What am I doing? Why am I going there?”

But I’ll never forget those first few months, in the northeastern city of Harbin. They say it’s the coldest city in China – dropping to 30 below in winter – and famous for its ice-sculptures.

Harbin, China, where Jeffrey and Adam arrived in 2012

I definitely felt the cultural shock and homesickness, but also a daily rush of adrenaline. The driving was crazy – beeping, like “Get out of my way!” I thought it was funny, at first.

And the food … everything was pretty much spicy. I couldn’t find anything that was “mild.” Before, in the U.S., I didn’t really like spicy food, because it gave me stomach problems. But once you start eating the Chinese version of spicy food, you get used to that, too.

After about four months, I was pretty much loving it here – and felt I’d be staying much longer than expected. That’s when the language became more appealing.

Before, I’d been a bit interested in Mandarin, but didn’t really have time or motivation. Chinese colleagues at my teaching center tried to teach me some, but I didn’t take it seriously. However, you go outside every day, where people speak Chinese – and no one’s speaking English. It became kinda natural: “Maybe I should learn that.”

In the summer of 2013, I started a weekly class. But it wasn’t enough. At that rate, I wouldn’t learn as quickly as I wanted. A teacher can teach you a language, but you really have to do it on your own. If you’re motivated, you need to self-study. You need resources.

Online, I found Moses McCormick. He really influenced me with his method of “levelling up”: he goes out and practices the language, with real people. That made a lot of sense. Not just with Chinese, but language-learning in general. Everything Moses was doing, I basically tried to mimic. But while he gets more of a thrill from hunting for people to have interesting conversations, I’m more laid-back. I wanted to do it from home, with feedback.

In late 2013, I visited the Apple Store, online. I searched for Chinese apps, and HelloTalk was basically on the first page. I downloaded it.

I immediately found Chinese members, for practice. There were tons of people, in fact. I liked that I could track what we were talking about, the feedback they gave, and how they’d correct my mistakes. Later, I could review the chat history.

That’s why I prefer to learn online. Maybe I could still do it like Moses, but instead take a pen and paper with me. However, that might not be as efficient, or feel as natural.

On HelloTalk, though, I was soon overwhelmed by all the Chinese members who wanted to practice. I couldn’t keep up. “Hello, hello, hello! Will you be my language-partner?” I even heard, “Oh, you’re a jerk. Another foreigner who’s not replying to me.” Even sad-faces. I needed to find a way to speak with all of them – at the same time.

Maybe a year later, in 2014-15, HT came up with the Moments feature. I could post anything – like the Facebook wall – for anyone to see. Now I could reach out to anyone following me. I posted what I was learning, for feedback on my pronunciation, through their voice-messages. I also made clear I’d give something back: “If you do it for me, I’ll do it for you.”

I started posting actual dialogues, with both the English and Chinese texts — so they could learn from the English, too — as well as the pinyin, with the Chinese spelled out phonetically. I included audio of my pronunciation, of both English and Chinese. After many English-learners requested that I slow down my speaking, I posted two versions: one fast, one slow.

It takes a lot of time to create Moments like these, in English and Mandarin, with pinyin. Listen to audio in the app (link opens on mobile).

Without being in direct contact, I’d become like a free resource. After about a year, I’d posted 30-40 dialogues. People were responding positively, saying the material was cool. I could feel they were also telling their friends: “If you want to learn English, follow this guy’s dialogues.”

When learning something new, like Chinese, I try to find the masters – like Moses – and mimic them. Then I’ll take what works, and apply my own style. My teaching method now is:

Helping others has become a passion. Whatever I learn, I try to help others learn it, too. Click To Tweet

That said, of all the HelloTalk members I’ve met, one stands out: Daisy.

In 2016, she messaged me. She was in Harbin, too, and used HT’s “location” feature to see who was nearby. We started chatting. Every week or so, one of us would ask, “Hey, how’s your language-learning going?” After a couple months, I suggested we meet for language-exchange. We’d get together a couple times a week, giving each other advice.

After two months, we started dating. We’re engaged to be married next year.

HT is good about making clear that it’s not a dating platform. But that’s what happened for us. When we finally met – and were having fun, learning together – it just became a relationship.

Meanwhile, after five years of teaching children, part-time, in Harbin, I wanted a full-time job. I found one far down the eastern coast, in Fujian Province, in the seaside city of Quanzhou. We moved here in April. Adam is still in Harbin, to this day – teaching Chinese children, as well as university students. He still enjoys China, too.

The landscape and climate of Quanzhou are in stark contrast to Harbin, where Jeffrey arrived in 2012.

But I’m loving Quanzhou. We’re by the beach, and the weather is not too hot, not too cold. A nice breeze blows through our apartment. I don’t know what the winter wind-chill will be like, but after Harbin’s winter, if I can’t get used to this, I don’t know what’s wrong with me!

That said, I’m now focusing on my new job. Some HT followers are asking, “Where are you? I’m missing you! How come you haven’t posted a dialogue in a while?”

I’m at a crossroads, too. There are many other things I want to learn. I’m also getting a degree online, and we may move back to America, where I’d find an IT job. For now, though, if I can help as many Chinese English-learners as possible, then it’s “Mission Accomplished.”

Plus, I wouldn’t have met so many interesting Chinese people. Maybe I’ve motivated them to improve their English, which could lead to a decent-paying job, or a better career. Which means, I may have a “butterfly effect” on their lives. That’s pretty crazy to think about.

Who is on HelloTalk? Get the Data!

Stories of Chinese Past Preserved With HelloTalk

One Reply to From Kmart to Quanzhou: Changing Lives Through Teaching English