Metamorphosis. You might know it as a title of Kafka’s novella. It’s also what happens to all of us throughout life. Of course, we do not turn into insects like Kafka’s main protagonist. But, we continue to morph and adapt to the changing circumstances around us.

Arcady describes himself as a chameleon. His drive for self-improvement is so strong that it spreads, and his powerful influence has changed lives on HelloTalk.

I had two big dreams when I was a kid. The first one, because of my love for cars, I always wanted to become a race car driver. The second one was to be an oceanographer with diving experience so that I could find treasure wrecks. But, I also thought my temper would kill be before 45, and I’m 44 now.

Metamorphosis into a Russian

Something I always prided myself on is the ability to adapt to other people, surroundings, and environments. My parents moved to the USA when I was four — I speak Russian fluently, but I also don’t have a foreign accent in English.

Perhaps it is because I’m bilingual that languages have always come naturally to me. Studies show bilinguals have an increased propensity for languages; as if their ability to assimilate languages is just easier. Even though I haven’t used my high school French for a long time, I can still follow conversations. I also learned a bit of Japanese in college.

My initial interest on HelloTalk was to learn Norwegian, a language I’m still working on in my own time. After a trip to Norway, I developed a great sense of appreciation for the country and I had an idea of moving there. Trying to maximise the number of helpful resources I downloaded HelloTalk. But, my initial goals for installing the app changed quickly, after a month or two.

Through using HelloTalk I became intrigued with the Russian community and felt a renewed interest in my roots and country. It’s been 40 years since I lived there. I look at Russia as an outsider and, perhaps, I have a more optimistic view than locals do.

Metamorphosis into a Teacher

Failing to engage with the Norwegian community, I started to correct Moments posted by Russian speakers learning English. When people kept asking for more and more explanations, I decided to consolidate these interactions into a group. This was over 1.5 years ago.

The current version of the group is what I would call version 2.0 — the most stable one. Since I started this project, the group grew from 15 to 30, then to around 50 members. About 20 of them are engaging regularly, on a daily basis.

The group is focused on teaching, and there are clear and simple rules. Members have to do their assignments, and they get at least one a week. You miss two assignments, you’re expelled from the group.

We have developed a strong sense of community and the group has become almost like a family setting.

Another aspect is participation. We have developed a strong sense of community and the group has become almost like a family setting. People are devoted to improving their English, for sure. But they also show concern for each other’s well-being, talk about their families and life plans. This strong connection has formed despite cultural and time-zone differences. This sense of belonging means we have very low attrition rates — once people join they stick around.

“Maybe I’m crazy, but checking the group is the first thing I do in the morning, and the last thing I do before bed” — says one of Arcady’s students. Full article here.

I have to admit, I had no prior teaching experience. But, managing the group has taught me a lot. There is, for example, one painful experience that will be burned into my memory until I’m dead. It was a reading exercise — students had to submit recordings of a passage, which was a text about smugglers. I’d listen to every recording and provide individualised feedback. I had to review about 35 passages which were between four and six minutes each, it took hours! Everyone read the same passage endlessly, even the group members were bored. Just mention the keyword smugglers to the group members and they will laugh at this experience.

Now, I prefer to assign tasks that are easier to check. It still takes time, naturally, but, it has never been too frustrating to stop. When I feel people are engaged I’m happy to put in the time.

One important change which influenced my teaching skills is that I became a parent. Between being a CEO of one company, working in finance for another, managing a teaching group, and being a parent, I have little free time left, if any.

But I don’t feel tired, I feel energised.

Metamorphosis into a Mentor

There is a difference between being a role model and a mentor. A mentor guides others to help them achieve their goals, a role model is who you aspire to become, they don’t engage with you to assist in reaching that stage. I’ve never considered myself to be either.

People now tell me I’m intelligent and have life experience. To me, an intelligent person is an expert in a unique niche. I don’t have that. I just have wide-ranging interests and, perhaps, you could say I’m seasoned in life.

Through teaching on HelloTalk I’ve learned to be a better teacher. The key is to create an environment where people feel comfortable and secure in their own skills, achievements, and inadequacies. It’s not about teaching English, but about understanding people and their individual struggles.

What you bring out of other people is more important than what you bring to the table. Group moderators have to be flexible, adaptive and creative; identify with their group members and give them individual goals.

My aim is to challenge people beyond their comfort zones so that they feel more comfortable with themselves, and so they can move forward with their own goals.

Between being a role model and a mentor, I’d like to believe I’m the latter. Whether or not I am perceived as one, is to be determined.

Perhaps the best argument to illustrate how the students see Arcady is the story of his birthday.

Whenever the level of interaction in the group dies out, I set off to recruit new members. In September I noticed the group wasn’t as active as before. It was a little disheartening, but it’s a natural lifecycle of any community.

September is also the month of my birthday. I thought I might get wishes from the group members, some simple “thank you”s at most. What happened was beyond my highest expectations.

At midnight I suddenly got a message in the group. It was a collage spelling out my name and birthday wishes, each letter held by a different student! I was quite moved as I knew it would’ve required a lot of coordination to create, with people across different continents. 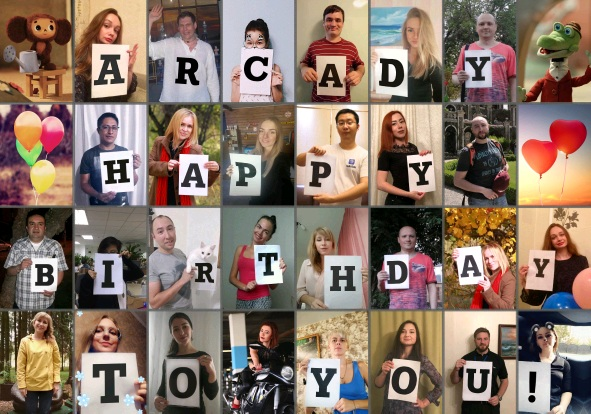 This, however, was not the end. An hour later a link appeared in the group. I expected it to be a silly Youtube video, so I wasn’t so keen to open it. But, I started watching. And as I watched my jaw continued to drop to the floor. I saw my name, and faces of my students. It was a seven-minute compilation of wishes from about 20 people. I was blown away. I was watching it like a third person receiving someone else’s recognition.

The video included messages of thanks — “We are grateful for fascinating lessons, and assignments that you give us.”, “You helped us so much in learning English.” — as well as funny birthday wishes like “Smile while you still have teeth”. Many voice messages, in both English and Russian, were recorded wearing birthday hats, in offices, outside, throwing confetti and blowing party horns. The video, among others, features people drinking vodka shots, blowing birthday cake candles, and even singing Marilyn Monroe style!

The video on HelloTalk was the largest recognition I have received on a personal level. It felt like a global tribute, or a lifetime achievement award. Click To Tweet

From my perspective, I don’t do anything special. I just speak with people. That they were ready to pull this together is the largest recognition I have received on a personal level. It felt like a global tribute, or a lifetime achievement award.

Want to know how hard it was to organise the surprise? ? Read the other side of the story form one of Arcady’s students.

I constantly try to evolve. And, I don’t define myself based on the number of likes, or by comparison to what other teachers post in their Moments. I always look out for inspiration, but only adopt methods that don’t infringe on my individuality, both on HelloTalk and elsewhere.

If you don’t change and learn you die, the same truth applies to business and any other field. Click To Tweet

A big transition is happening in my mind now, I’m re-prioritising my life goals. Teaching on HelloTalk and my new work as a CEO both allow me to expand my horizons. They both lead to a greater purpose, to bettering myself and others around me.

What matters is communicating with people and making an impact. When you look back on your life you want to be proud, and the way to do it is to leave a legacy to people around you.

Since I was a kid, I wanted to accomplish something greater. I don’t want to regret missing any opportunity that could make an impact. The only way to exercise the demon of regret is not to leave things undone.

Interviewed and written by Marta Krzeminska

One Reply to Russian-American Receives a Lifetime Achievement Award