HOUSTON – My frustration had grown gradually, over the years.

I was raised in Houston, a city with a significant Spanish-speaking population. I took years of Spanish classes in school. I’ve loved the language, the music, and salsa dancing. As a tutor of math, reading and computer skills, I have some student’s parents approach me in Spanish. I even married a man from Spanish-speaking Peru.

Yet, despite it all, I could barely string together a sentence in Spanish.

It became more embarrassing, as people assumed that by now I should be able to speak Spanish, instead of forcing them to understand me. The worst was when my husband’s family would gather, around a table, yakking away in Spanish – and I’d just be sitting there, quietly.

But all that changed after my divorce, two years ago. I was 41, and to seriously learn Spanish gave me something to do. Also, because I don’t want my young daughter to go through what I went through – to just sit there with her Peruvian family, like an idiot, because they’re not talking to her.

Then I realized what my problem had been, for all those years: I’d learn Spanish in class, walk away, but do nothing with it. I never even had the idea to practice what I’d learned, outside of class.

In the Spring of 2017, I searched online for a way to practice Spanish with native-speakers. I’m very picky, and wanted to find some partners who knew the language well. In April, I chatted for a while with one Spaniard on WhatsApp. But that faded. Then, I registered with HelloTalk, and … Wow.

It was like I’d struck gold. There were so many people available to me, 24/7. And the diversity – my goodness. All kinds of people, from all over. We need it, because our attention-span can be limited.

Soon after joining HT, I found another Spaniard as a language partner. We hit it off, and talked a lot. He invited me to visit Valencia, and introduced me to his wife and daughter on Skype – so there was nothing weird about it. A few weeks later, I flew to Spain – and he picked me up from the airport.

It’s amazing how HelloTalk resembles Facebook, but much better. It combines social interaction with others, with learning a language, meeting people, learning about foreign cultures, networking, even travel and job possibilities. It can be addictive, too, as others have told me: I can spend about five hours a day on it. Learning Spanish, correcting translations, teaching members, and managing several groups. 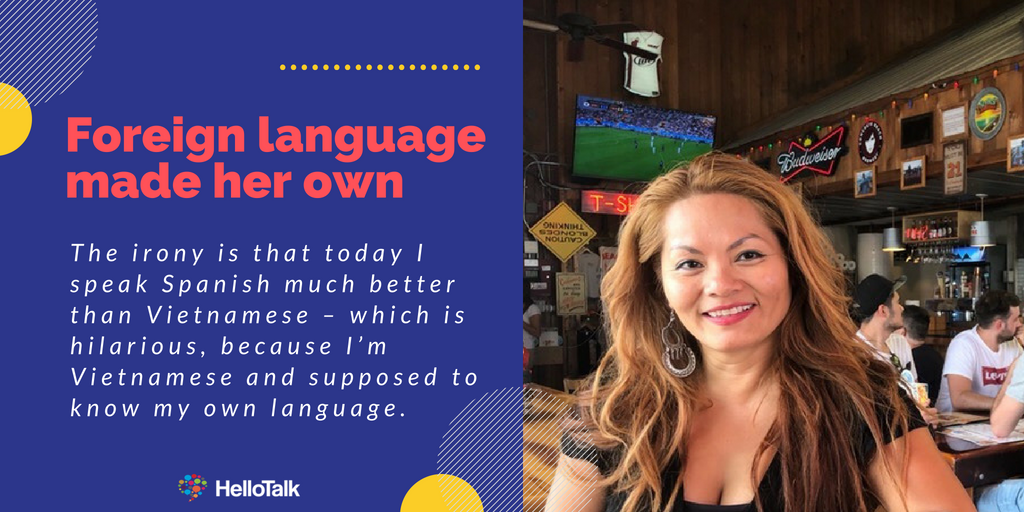 The irony is that today I speak Spanish much better than Vietnamese – which is hilarious, because I’m Vietnamese and supposed to know my own language. I was born in Vietnam, and my parents brought us over when I was just 6. I was the youngest of nine children, and they arrived with nothing – four of us slept in a bed. My parents worked a lot, until late at night. So, I was speaking English at school, and most of the day. I didn’t practice enough of my mother-tongue with my own parents.

I now realize, through learning Spanish, how important it is to practice. One hour of practice with a native-speaker may be worth more, than hours and hours, in class after class. But you need to find the right person: someone who’s knowledgeable about the language.

They don’t even need to be a teacher. In fact, some HT members are teachers who want to speak English back to me, because they want to “teach” me. But it’s not worth it for me, to learn a few more words or expressions. You should take the initiative to learn on your own, not wait for someone to teach you. Then, to practice what you’ve learned. HelloTalk is really an environment to practice.

Within my HT groups, it’s important for me to write the same sentences in both languages, then for you to correct my grammar and structure, so I can learn how you express yourself in your own language. Then, to record you saying it twice: first, to hear it slowly, for your pronunciation; then normal speed, as a native-speaker would. It’s more time-consuming, I know. But as I always say: “I prefer quality over quantity.” Sorry, but this is like a classroom. I’d prefer to learn a few key messages each session.

I’m very detail-oriented, and it comes from my background in Accounting. I worked in a CPA office, for seven-eight years. In tax-planning, we’re very structured with our note-taking for clients. Very strict, down to the dot. People I meet on HT ask me: “Why are you so disciplined, with the language?” I’m sorry, but if I see a mistake, I have to correct it. It’s either black or white, right or wrong; there’s nothing in the middle. I teach some how to develop their notes, to be more like mine, with bullet-points. 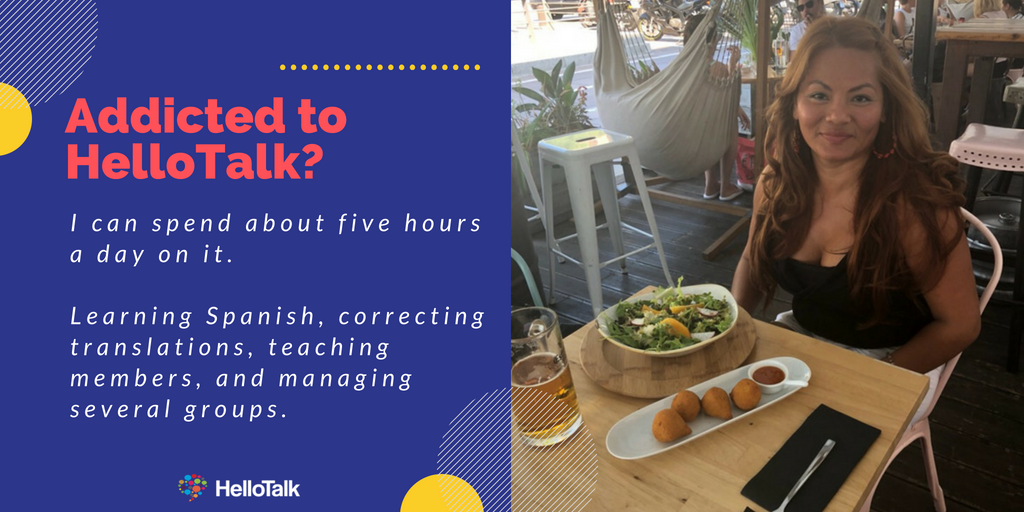 In fact, my language-learning, in general, and my HT experience, specifically, have even made me a better teacher – with my students in Houston. It helps me to be more patient, when dissecting things, or explaining a process. Everyone learns differently, and HT has given me more ideas for how to teach the equations of math, like the complexity of language. I’ve now discovered different methods, to develop different skills. I tell people: “If your method’s not working, you need a different method.”

HT has become such an important part of my life, I’ve even gotten my daughter involved. She’s 6. She sometimes helps me with recordings, in English and Spanish. My group members know her, and some of them greet her in Spanish: Hola, Brianna! ¿Cómo estás? She records, listens and repeats it back.

She may be HelloTalk’s youngest member!

Before joining HT, I’d never thought about living somewhere abroad. But now that I’ve been to Spain twice, and met my language partners, I think about it. If my daughter weren’t here, I might move there. HelloTalk has opened up a whole other world – and is even opening my daughter’s eyes, too.

Apart from teaching content Sandra shows us the world through her eyes.

Who is on HelloTalk? Get the Data!

Stories of Chinese Past Preserved With HelloTalk