How a Belgian Grandpa Got Famous on Chinese Social Media

Una cerveza por favor! is a phrase that perhaps summarises his approach to languages. ‘Numbers, drinks, and polite expressions are the the gateway to a new language’, says Julien, as we chat over Skype, him from his home in Belgium, me on the Spanish island of Gran Canaria.

Over the last six years Julien himself has became a language gateway, teaching Dutch online to over 150 Chinese students. ‘Speaking competence disappears when the language is not used’, he tells me. Motivating students to practice the throaty Dutch language has evolved from a hobby into … a cue to travel around China.

‘My company boss says I’m crazy to teach like this.’

‘My company boss says I’m crazy to teach like this. My wife was very sceptical at first, but now she is enjoying talking to students too, and joins me on video calls. So does my daughter sometimes!’ True, not many people would spend hours each day sending video lessons by email to reach behind the Chinese firewall. Even fewer — if any! — would do it for free. But, Julien is unique.

Based in Antwerp he should know a thing or two about both renowned gourmet Belgian beer, and the multilingual landscape of Europe. Or… should he? His school-learnt French is rusty, and his German recently made a taxi driver laugh. ‘It’s a truism perhaps, but if you don’t use it you lose it’, he emphasises, ‘I’m really not the best one at languages in my family.’ Julien is an explorer of cultural nuances.

‘It’s a truism perhaps, but if you don’t use it you lose it’, says Julien about learning languages.”

What drives Julien to delve into languages is a desire to share experiences and build connections. He picked up German sailing on a cargo boat between Basel and Rotterdam — one of his first jobs. English, his second strongest language after Dutch, he learned from TV series and at work. It was Sun Yan Lu one of his students from Shandong who motivated him to start learning Chinese. But, if you’re waiting for a “zero to hero in Mandarin” story — hold your horses! His Chinese is limited to two phrases: wǒ de míngzì shì Julien, wǒ bù huì shuō zhōngwén — ‘my name is Julien, I don’t speak Chinese’. Bare essentials.

Julien has just returned from his seventh trip to China. This time it was a visit to Guangzhou’s Chimelong Safari Park that left him mesmerised. The year before it was a five-day boat trip between Chongqing and Yichang which made his eyes sparkle. China has mesmerised Julien since 2012, when as a travel bus driver he accompanied a group of Beijing students around Western Europe and Scandinavia. During pit stops, five or six young people at a time would approach him to chat; only in a group would they have enough English vocabulary to communicate.

Mutual curiosity created a bond. Julien was nicknamed their uncle and, when it came to parting ways at the end of the trip, some of the students shed a tear. The following year… Julien ventured to China for the first time.

A degree in accounting his father insisted on clearly doesn’t match Julien’s exploratory spirit — ‘I’m not someone who likes being stuck between four office walls’, he says. Cultural curiosity is one thing, but it’s mainly the friends he made on driving assignments who became his reason to travel to USA and Canada, among other places. Whether it’s a tour of farmers, or a group of roller coaster fans — Julien’s approachable manner and personal attention resonates with people across the board. It is therefore no wonder he found himself at home in the HelloTalk ecosystem, and became a sensation on Chinese social media.

‘I wanted to do language exchange, learn Chinese and teach Dutch.’ After a few days on HelloTalk, however, Julien had several students, and his desire to help others started consuming more time then he anticipated. The recommendations of his teaching style and personal attention spread on the grapevine, eventually hitting Weibo. 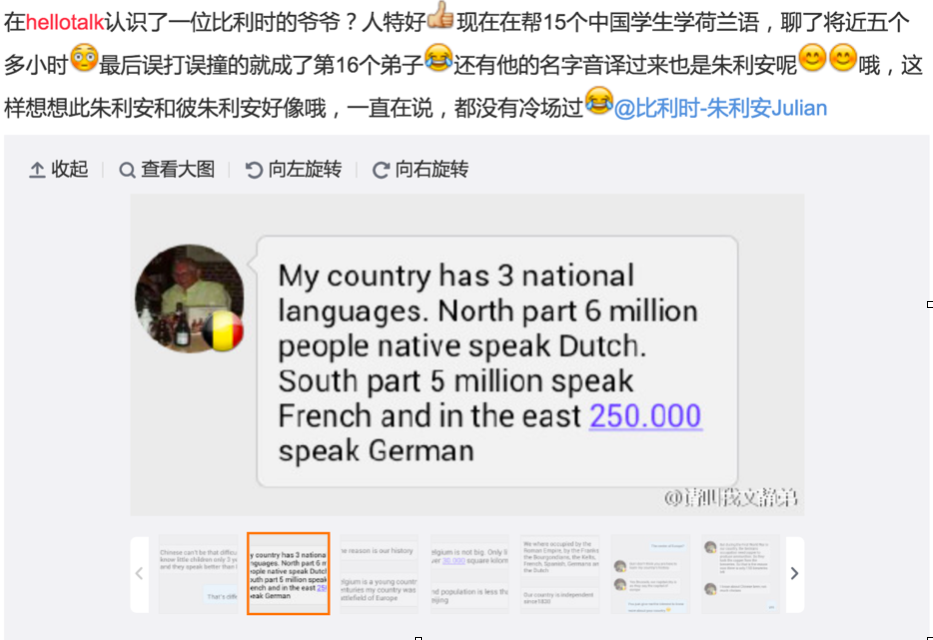 Why grandpa?, you might wonder. Over the years Julien’s connection with students became much deeper than that of a standard teacher. Each trip to China he meets with one or two of his students in person; ‘I met their mothers, fathers, Sun Yan Lu grandpa even contacted me to thank for taking care of his granddaughter!’. He lights up talking about his students’ stories, how Annie Gao Bore studied airplane design, Lin went to study in Japan, and Zhang Hailun loves football. ‘They are like my Chinese family’.

The family explores each other’s culture with vigour. Last year Julien drove to the Groningen airport three times to pick up visitors! They also travel to other places in Europe, Amanda Gao Kyumore who now lives in Australia, met with Julien in Paris, with Tryne they travelled to Paris and Switzerland, with Yuchi Zhang to Brussels, Bruges, and Paris. The hospitality is reciprocated each time Julien travels to China. His student Yun Xia accompanied Julien his wife and daughter throughout the whole trip this summer — ‘she practiced her Dutch and helped us navigate in Chinese’.

Just like the stories of his students cultural differences between Europe and China are bottomless topic for Julien. Asked about Chinese cuisine he highlights hotpot — but, ‘primarily with noodles!’ ‘I’ll eat anything apart from insects… and chicken feet!’ he laughs. Laughter aside, Julien strongly relates to the Confucian virtue of respect for the elders which permeates Chinese culture. It’s the same respect he was taught in his youth and what he feels is lacking in the modern European society.

Julien strongly relates to the Confucian virtue of respect for the elders which permeates Chinese culture.

Likewise student diligence. When Belgian students party for the whole year to cram for a final week and resit the exam at the end of the summer (erm… probably not just Belgian ones!), their Chinese counterparts study regularly, 10 to 15 hours a day. ‘They feel a lot of pressure not to disappoint their parents’, he notes, ‘I have a lot of respect for my students.’

On his side, Julien pays back with hard work; after all, student-teacher relationships require maintenance. Everyday Julien spends hours sending emails, holding conversations through HelloTalk, and giving practice classes on video calls.

What would he do without his Chinese students? ‘Probably solve crosswords and watch TV’, he says. Admittedly, much less exciting than eating snake soup in Hong Kong and planning his next trip. The only question is… which student to visit next.